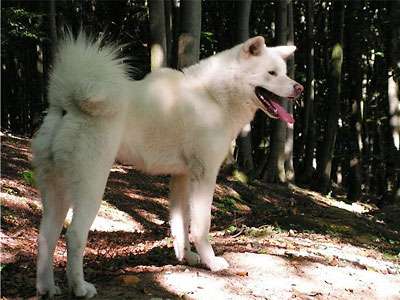 Confident, independent and loyal, the Akita is a truly majestic dog breed. There are two types of Akita, which are the Japanese Akita and the American Akita. A large dog, the Akita is not a breed that’s recommended for first time dog owners. However, for experienced dog owners, the Akita is a fantastic breed.

Unlike the Japanese Akita, the American Akita can be many colours, like white, brindle and pinto, and can feature a black mask. The Japanese Akita is not allowed to have a black mask. The American Akita has a thick double coat, which is very dense and soft. The undercoat is very soft an is slightly shorter than the outer coat. The outer layer of fur is straighter and sightly rougher than the outer coat. The average American Akita male measures between 66 to 71 cm and weighs 100 to 145 pounds. The average female Akita measures 61 to 66cm and weighs between 80 and 120 pounds.

Confident and self-assured, the Akita is a very dominant and assertive dog, which is very loyal to its owner. The Akita has some similarities to the house cat, in that you will often see it grooming itself and cleaning its face like a cat. The Akita is a very clean and hygienic pet. As the Akita has a dominant nature, it can be territorial. Due to their dominant streak, the Akita doesn’t get along with other dogs or animals particularly well, and it tends to clash with dogs of the same sex.

The Akita has been used for a wide variety of purposes throughout history. In the past, the Akita was used to retrieve water fowl, and also as a hunting and fighting dog. This breed has also been used by the police and the military.

The Akita is an intelligent dog breed, which also has a strong and dominant nature. Due to their intelligence level are fairly easy to train. However, the Akita is very assured, so needs consistent obedience training and positive reinforcement.

Overall, the Akita is a strong and confident breed, which makes a great companion for more experienced dog owners.