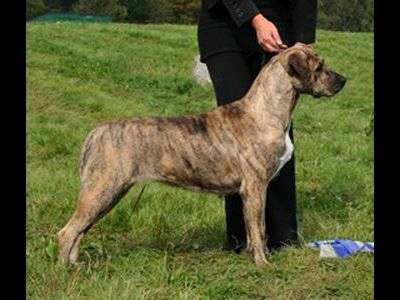 The only recognised native breed of Uruguay, Cimarron Uruguayo doubles up as a friendly pet and a watch dog. This mascot of the Uruguan army has managed to survive the test of time, evolving from the original wild species to a popular domesticated, multipurpose breed in present times.

Origins of this breed can be traced back to the Portuguese, Italian and Spanish colonisation of Uruguay during the 16th and 17th centuries, when the conquerors imported cattle and horses from Europe into a region that lacked other commercial interests. Naturally, dogs were also imported to herd and drive the livestock. Cimarron Uruguayo is believed to be a cross of Molossians originating from Spain and Italy, given their striking resemblance. Once conquerors were evicted from Uruguay, domesticated animals were set free and they turned feral. Hence, the Spanish name “Cimarron,” which translates as “wild” in English. Only the best of these feral dogs survived – not only in the wild but also during the mass culling that happened in the 19th century to curb their growing numbers.
Dogs from this highly evolved group were subsequently tamed and trained to herd livestock, hunt big game and work as guard dogs as well. The present-day Cimarron Uruguayo is a direct descendent of this group of multi-purpose dogs.

Cimarron Uruguayo has whatever it takes to be a survivor, hunter, protector and a work dog. It is known to be attached and loyal to its owner, going to any extremes to protect people, livestock or property. Aggressive, fierce, dominating, wary, alert, extremely agile and powerful, it really takes a high-hand and rigorous training to get the dog to respond to orders, which at times may go unheeded.
Having a Cimarron Uruguayo at home is really not an option for novices or for families with kids or small pets. Despite the best of training, hunting instincts stay innate and Cimarron Urugayo will chase and pin-down or may even harm smaller pets. Though it is not really known to be aggressive towards humans, a watchful eye is a must if the dog is adopted as a pet.

This medium-large breed, muscular and strong, weighs roughly 73–100 pounds – males being heavier than females. Height at the shoulder level varies from 20”–25”; again, male dogs being taller than their female counterparts. The general appearance resembles the Molossians, with the skull region more chiselled and narrow. Almond-shaped eyes, Puma-like ears and dual coats of short, dense and smooth hair are characteristic of this breed. Primary coat colours are fawn and brindle, with minor variations in shades and striations.

The breed is assumed to be a heavy shedder, requiring regular brushing and no elaborate maintenance. It is, however, mandatory to introduce the Cimarron Uruguayo to essential grooming routines, such as nail clipping, brushing and bathing at an early stage, to avoid coaxing a 100-pound adult dog to obey orders.

Rigorous physical exercises, agility, obedience, and socialisation training is a must for the Cimarron Urugayo to be responsive, safe and happy. The right type of training can at best tone down the natural killer and survival instincts in the dog, but there have been several instances where these dogs have won obedience and agility competitions.
At least 45 minutes of vigorous activity is a must to avoid any destructive behaviour such as excessive barking, aggression, etc. These dogs need a lot of space and movement, and are not suitable for apartment lifestyles. Making sure that open spaces are well-secured is also a must, for they usually manage to run free, pursuing almost anything that moves. Time, techniques, patience and high-handedness is a must to train the Cimarron Uruguayo.
A great companion and an excellent watch and work dog; a well-trained Cimarron Uruguayo can be a dependable pal!