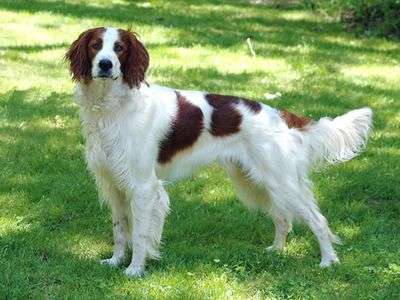 These dogs are loyal friends and family members and, when trained patiently and considerately, can make your relationship a very rewarding one. As they are gundogs, they like to take their sweet time in learning the ropes, but they are highly intelligent, and eventually become proficient hunters. Agile by nature and obedient by training, these dogs can be taken anywhere, from hunting trips to weekend shopping sprees.
Athletic but not overly racy, and extremely intelligent, they will serve you wisely as guardians and personal trainers. They are good-natured and affectionate, especially toward vulnerable family members, such as children or the elderly, and will not hesitate to play the clown to cheer you up. They need generous space to roam freely and a master that is old and fit enough to stand up to their lively play. Their training should be consistent and tempered, and they will test your patience before they become completely submissive. With firm handling and sustained exercise, they are less likely to develop behavioural problems that are far easier to prevent than train.
Dominance levels vary for this breed from one pup to the next, even in the same litter. Their temperament will show at a very early age. They are swift, energetic, and with an acute sense of smell, and will work well in nearly any type of climate or environment, including wetlands.

Physically, they are medium-sized dogs. Males will stand 24 to 26 inches tall at the shoulder, while females will measure 22 to 24 inches. They typically weigh between 50 and 70 pounds. There are two types of Irish Red and White Setter: field type and bench (show) type. The former is slightly shorter and has a proportionally shorter coat.
Their heads are broad and their skull is domed, with a square muzzle. Their eyes are hazel or dark brown and not as bulky as the Irish Red Setter’s. Level with the eyes and lying downwards alongside the head are the ears. The jaws are strong, the neck is slightly arched and very muscular. The shoulders are laid fairly back and the elbows are free, allowing the legs to bend parallel to the body, not inwards. Wide hindquarters with powerful stride make this dog an excellent runner. The ears, tail and paws are well-feathered and light. The parti-coloured coat is cream-white or pearl-white at the base, with solid burnt sienna and burnt umber patches. The backs of both front and hind legs and the tail are also adorned with straight feathering. Textured and feathery, the silky coat is not meant to be curly.

With proper care and daily exercise, Irish Red and White Setters can be expected to live anywhere between 11 to 15 years. They are prone to developing von Willebrand’s disease, Canine Leucocyte Adhesion Deficiency and Posterior Polar Cataract, which luckily doesn’t usually lead to blindness.

Bred for conformation shows, the bench type is less energetic and slightly more submissive than the field type. Roaning is not considered a permissible trait for showing Irish Red and White Setters, and they are, therefore, not allowed to have roan coats or patches from around the face, under the elbows or under the hocks. Flecking or mottling is allowed, on the other hand. Curly hair is not considered suitable for show dogs. Males should have two fully descended testicles.